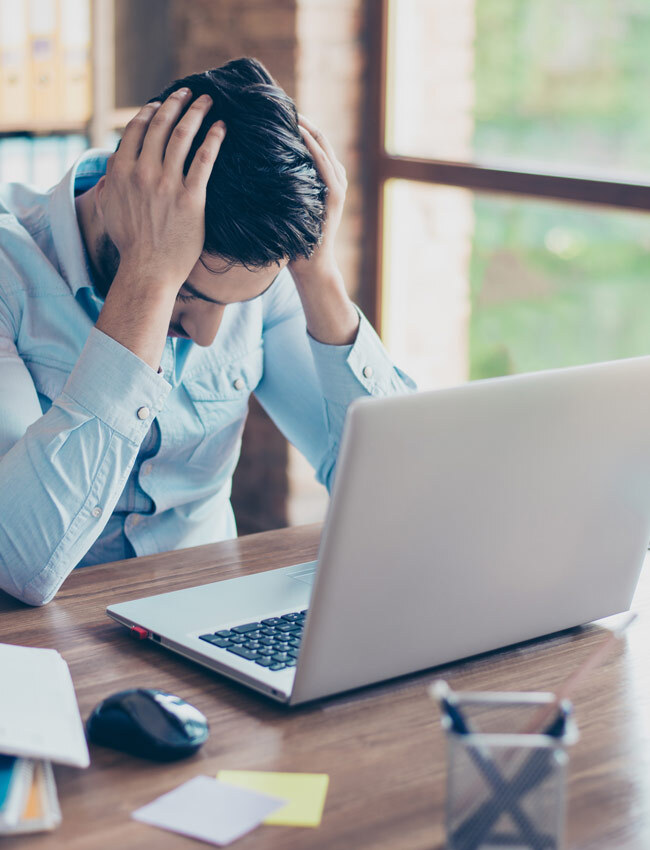 Are You In A Struggle Phase? Here's How To Escape It

When you can barely pay your bills, life is hard. Recent university graduates can attest to this. You put in long hours only to just eke by. That’s the struggle.

You may experience this as you enter your first career, start your first business or make a major life change. In these situations, you can’t charge top rates because of your inexperience, which means your finances are razor thin and every misstep hurts. Plus, you only have a limited capacity to deal with setbacks.

When you first enter the workforce, you enter your first struggle phase. You have debt, low income and very little assets to fall back on. If, at the end of the month, you see slight increases in your bank account you consider it a win. It’s an extremely high stress period because you’re constantly dreading an unforeseen expense, which could signal disaster.

But that’s not the only time you experience struggle, if you become an entrepreneur. It will reoccur when you become your own boss. The high entrance fees, large cost of mistakes and reduced income as you build, will often put you into concerning territory, financially. That’s especially true with entrepreneurs, since they’re not interested in scaling back their lifestyle creep. You have higher expenses than your first struggle phase, which reduces your cushion. The problem is operating a business has an entire level of unforeseen expenses that are just waiting to peel away your safety net. If lifestyle expenses remain high, then you have less flexibility to work with. 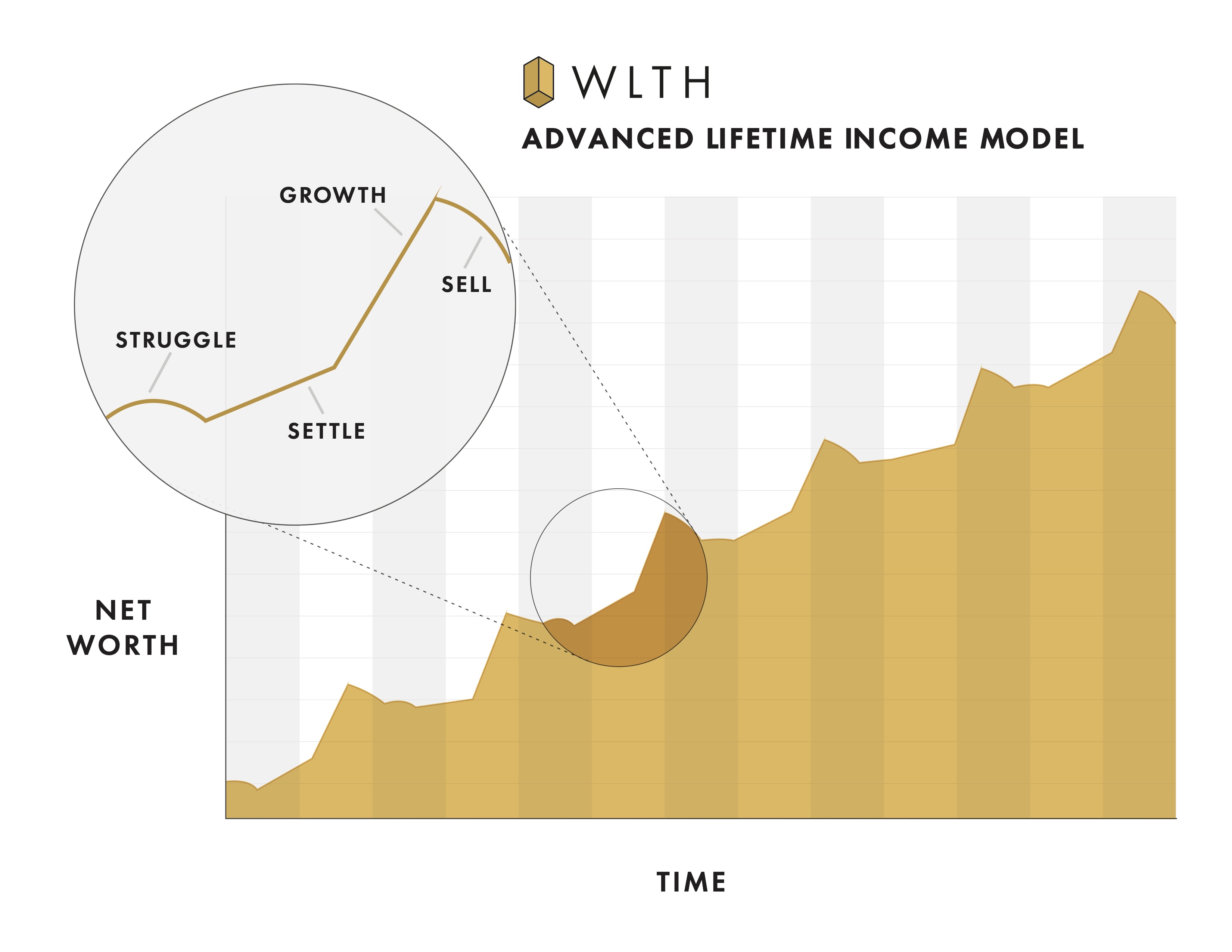 Now that the doom and gloom of this part of the lifecycle is on you, it’s also on you to shorten the length of the phase and escape it. Most adults have had to dig themselves out of at least one struggle cycle. If you volunteered to re-enter it in order to become an entrepreneur or through a major career change, then I commend you. If you’re fresh out of school and looking to get yours, then good luck.

The struggle phase is loaded with self doubt, setbacks and shockingly impactful small figures. But with the right strategy, you can escape it faster than most. Trust me, as a serial entrepreneur, with several of these cycles under my belt, I have become well acquainted with this phase of wealth creation. It may feel never-ending, but you’re moments away from growth.

The number one reason people stay in the struggle phase longer than they have to is because expenses come out of nowhere, knocking them backwards. It seems like car troubles only happen when you’re down to your last few dollars. Or that is the month that a company accidently double charges you and they promise to take it off next month’s bill. Next month!? You needed that money to pay bills this month. It happens. It happens a lot. And it seems to happen more when you’re short of money; it doesn’t, it just feels that way.

But the point stands that you’ll need money for things you just simply weren’t expecting. How do you do this?

Start planning for them.

Most people in the struggle phase have very little left over after expenses are paid then they treat themselves with whatever remains. The problem? You actually needed that money you used to treat yourself. Instead, while in this phase, get comfortable being uncomfortable for a few months. If that’s impossible, then take advantage of overtime opportunities or a part time job, beyond your regular work hours or business.

When I opened my first retail store, I was chronically underfunded. It meant not only could I barely pay my bills, I was unable to grow the inventory of my store as needed. My solution was a part time job at a restaurant on the same street. Four nights per week, I would close my store at 5:28 pm and start my serving shift at 5:30. The extra income would cover most of my bills and allow me the freedom to reinvest all profits.

Was it fun? No. But it helped me get out of the struggle phase months or years earlier because with those funds, I was able to build a safety net. Now, I don’t think this would work for everyone, but do what you can to build your own safety net. When I had a bad month with my store, I could throw in my extra income from the part time job to keep things moving.

Looking back, it probably saved the business on more than one occasion.

Understand the Value of Incremental

Getting out of the struggle phase is not some big moment in time, but rather the collection of small efforts put forth over a long period of time.

My clients often don’t see it themselves. A business owner that’s locked in a five or ten year lease will struggle to make payments in the first year, but by year three or four they could be significantly outpacing the small annual increases built into the lease. It’s similar to how an employee might not feel the benefit of a $1 or $2 annual raise, but can definitely see the value of $5 or $10 per hour increase over a 5-year span.

Making small increases in income - and at the very least keeping expenses level - will pay off in the long term. Another simple example that relates to most would be the cost of student debt when you exit school. A $500 dollar per month payment with a 15-year payback will seem beyond daunting. Especially when that payment eats up all of your spare money. But with raises and skill increases, after a few years that $500 is not so bad. And then at some undetermined point in the future, you’re able to pay it all off and the $500 is reduced to $0. Now the raises that helped you get ahead of that payment are more impactful than ever.

Small changes can seem insignificant at the time but the impacts eventually add up. If you see as many people’s finances as I do, you can almost pinpoint the moment where those increases turn into life-changing relief. How do you speed this along? Make more money. You can be more aggressive about raises or new business ideas that can immediately increase your income. Speeding up these small incremental changes can shave years off of your struggle phase.

Get A Big Win

Whether it’s by happen-chance or planned, it’s important to find a big win. Or, at the very least, set yourself up to potentially make a big win. This doesn’t mean playing the lottery, but it does mean take some chances. Maybe it’s that hobby you turn into a successful side hustle. Or it’s just a smart real estate purchase. Or it’s discovering a great aunt that passed and left you with money.

It doesn’t really matter how this extra flow of income comes in, but you need to set yourself up for the potential of such a windfall (inheritances, not included!).

For me, my retail store was my big win. I had opened a store as a business to learn from and see if I could turn a hobby into a career. When I started, it was extremely difficult and I put in long hours. Not only was I working in an industry I didn’t really have experience in - which meant I had lots to learn - but I was grinding out every minute I could to speed up my company growth. Although I had expected to earn a modest income and then grow from there, the company quickly started to take off. My initial three year goal was hit in the first six months and I was occasionally having five-figure days. I didn’t expect that. All of a sudden I had the ability to purchase a home and buy a new car. My investment in my company provided wealth that jumped me years ahead of my peers. And, most importantly, it gave me enough money to hire more staff, freeing up my time to pursue further education and start other businesses.

I know the slow and steady turtle wins the race, and that’s what incremental growth does. But the rabbit can get a fantastic head start before morphing into a turtle for the win.

In my experience, the big wins aren’t entirely predictable either. You need to have a few reasonably safe bets that you have confidence will produce incremental growth, and then be pleasantly surprised if they turn into big wins. Where most people go wrong is the fear of risk. Instead, they play so safely because they believe they don’t have assets, businesses, or skills that can turn into a big win. Without taking the risk, though, then you can never see that victory.

And don’t worry if the idea doesn’t provide rocket-fuel growth. If it doesn’t, you’re still building incremental growth through your main outlet.

This one is a bit difficult for people to understand at first, but in essence, find ways to reduce costs through smart and effective partnerships. Now, this does come with a word of warning, since partnerships can be a complete disaster if done poorly, so be aware of that.

But partnerships can also be financially huge. The simplest example is in a romantic relationship. You meet, you fall in love and then bam, costs are split! Instant reduction in housing costs, cuts in cell phone plans, split costs on internet bills, and in a perfect world a huge reduction in vehicle costs and maintenance. Is this a fool-proof plan? Absolutely not. It’s exactly the opposite since many many people get burned financially in relationships since financials for one partner aren’t often on the level of another. But, for the lucky ones, it’s a huge win.

Now, let’s remove romantic complications, and return to simple business partnerships. Splitting the cost of rent, administration staff and utility bills can be a huge boost. Unlike romantic relationships though, your partner in business should bring significant capabilities - whether it’s via talent, access or finances - to the table. Again, all partnerships have the capacity for failure, so choose partnerships wisely, understand each partner’s motivations and develop adequate exit plans. And make sure each partner can pull his or her own weight.

A good partner can lead to an immediate or near-term end to the struggle phase. It’s not often considered, but what a difference this can make.

While the struggle phase is often glamorised as a beautiful learning process, through tales of living out of the garage while an entrepreneur prepares to take over the world, in truth you want to exit this stage as fast as possible. While it will require some discipline and a little luck, you will get there with the right strategy and risk.

Once you do, then you can see where the real fun kicks in, as the settle and then growth stages begin.

Knowing when to bootstrap and when not to is vital, not only to your venture’s health, but also to the potential returns in which you seek.

When you realize your search for perfection has become a business flaw, instead of tweaking everything under the sun, reframe imperfections as a strength. Here’s where you can look for opportunity.

Here’s How To Set Goals That Work Faster

It’s hard to fathom that the goals you have aren’t just tangible, but reachable on a much shorter time frame than originally thought. "How can I reach a goal so fast?" is the inevitable next question.